You are here:Blog»CO2 in industrial processes: Personal and plant protection by reliable carbon dioxide monitoring 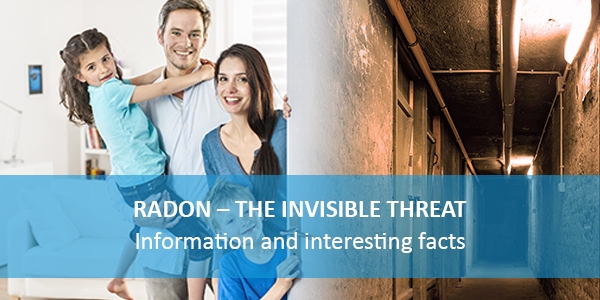 Radon is dangerous! For many years now, long-term measurements have been carried out in order to observe the effects of radon on the human body. As a matter of fact, this gas is more dangerous than passive smoking and also the second most common cause of lung cancer, directly after smoking.

In some regions of Germany and Europe, the radon concentration in residential buildings is so high that buildings become even partly uninhabitable. For this reason, solutions which will keep the radon exposure to a harmless minimum are urgently needed.
[Radon ventilation] reduces this risk significantly and the affected premises can be used again!
In the first part of our article series on radon, we will have a look at this gas, where it is frequently found, what the limits are and why it is a danger inside buildings.
Then, we will deal with typical questions regarding the measurement of radon gas in houses.
And finally, we will introduce you to a flexible technical solution which helps to reduce the radon exposure in buildings and thus maximize the usability of the affected rooms.

What is radon?
Radon is an odourless, tasteless and colourless noble gas with a high density.
It is a radioactive decay product of radium, thorium and uranium. Due to its nature, radon can be released into the atmosphere through gas-permeable soils. If the earth's surface is covered with buildings, radon also finds its way into cellars and basements.
In addition, it is soluble in water and fat and decays into radioactive isotopes. These decay products are no longer gases, but heavy metals such as lead, polonium and bismuth, containing alpha, beta and gamma radiation. Especially the alpha radiation may become dangerous for humans, because it can damage body cells. The isotopes of radon gas are free-floating and combine with water molecules, so that deposits on surfaces or dust particles may form. That means humans could eventually inhale these particles when breathing. 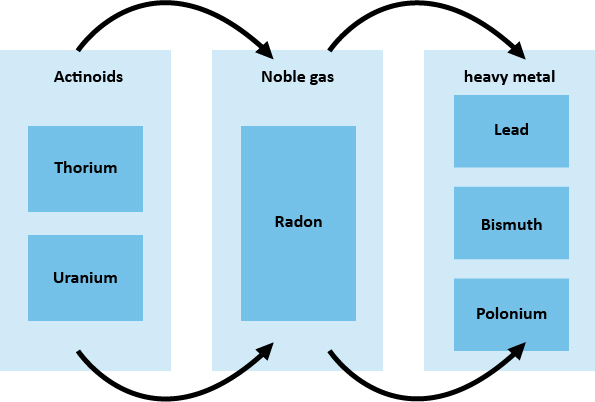 Where is radon frequently found?
Radon is formed as a decay product by uranium and thorium deposits in the different rock layers. Areas of the low mountain range with large graphite deposits, and, in rare cases, sedimentary rock, are particularly affected.
Also, the radon content in houses depends on the nature of the soil layers. The closer uranium-containing rock layers are to the earth's surface, the greater the chance for radon to reach the surface.
Both the grain size distribution of the minerals and the temperature determine how much radon can rise. Cracks and fissures increasingly accelerate the up-flow of radon. However, weather conditions also influence if radon can be emitted into the air or not.

Besides radon-containing rock, construction materials can also be a source of exposure inside houses. This is because rock with a high thorium or uranium content is used for products such as plaster, concrete, cement, bricks and natural stone.

Attention: Water might also carry radon from the soil into the room. Studies have shown that radon gas is emitted into the air when taking a shower or through the washing machine. However, this mainly happens in houses using well systems.

Geoportal of the Federal Office for Radiation Protection (BfS)

However, this method is not accurate enough in order to draw conclusions on how severe the  radon exposure inside houses is, as an increased concentration can also be a local or a regional problem. Thus, often individual radon concentrations can be measured from house to house and from room to room in the very same street.

Limit values of radon in Germany and Europe
The fact that radon is a serious problem is indisputable. Even the WHO is dealing with this issue, giving recommendations for limit values. In Germany, the recommended limit value for radon is currently 100 Bq/m³ of room air. Other countries in Europe also consider radon exposure as a serious matter. Many European countries have already stipulated guideline values legally. A Radon-map for Europe can be found on: radonmap.com

For reference values of some European countries and corresponding links to the official radon maps please see below.

In recent years, large-scale studies have been conducted on radon in apartments. Unfortunately, a generally applicable limit value could not be defined from these studies, because radon exposure depends on geological characteristics that can vary significantly within a country. As none of those studies could identify a lower threshold value for the radon concentration, the reference values are relatively low, compared to other countries.

When does radon become dangerous inside houses?
Radon is a high-density gas. It breaks down into isotopes within three days and those isotopes are dangerous for humans.
Since radon isotopes dilute considerably outdoors, the risk of high concentrations outside is minimised rapidly. However, if radon gas reaches the inside of a building through leaking building envelopes, this can have health consequences for the residents and reduce their quality of life. In poorly ventilated rooms, the air concentrates with radon. As a result, the radon concentration*²,³ increases. This mainly affects rooms in cellars or basements as well as ground floor rooms. However, if Radon is not removed from those buildings, the concentration will increase continuously and can spread throughout the entire house.
*² average number of atomic nuclei decaying radioactively per second
*³ which is measured in Becquerel per cubic meter (Bq/m³)

Humans can easily in- and exhale radon. It only becomes dangerous when the heavy metal decay products combine with dust. In this way, the radioactive substances could be brought into the human body and settle in the lungs or trachea, causing permanent damage to the upper cell layers. In the long term, this increases the risk of lung cancer tremendously. Even damage to the skin as well as to the ear, nose and throat area is possible. For this reason, radon should be removed from the house before it starts to decay, in order to avoid the appealed danger in the first place. A radon ventilation system, which automatically performs a situation-specific ventilation process, helps to minimise the risk of dangerous radiation.

In the second part, you will find the most important information on how to deal with radon indoors, how to measure the radon concentration and what you can do to minimise the exposure.

More in this category: « ZILA on YouTube: Video series about room dehumidification and cooling Radon inside the house, in the cellar or basement »
back to top