You are here:Blog»Radon inside the house, in the cellar or basement 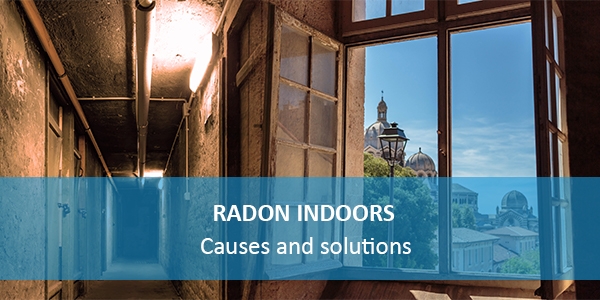 In Part 1 of our radon article series, we have already laid the foundations on the subject of radon gas with regard to its characteristics, occurrence and limit values.In this second part, we will focus on radon exposure in houses, cellars and basements.

How can radon reach the interior of a building?

The exposure through radon inside buildings can have several reasons. The main factor is that the upper layers of rock contain uranium and thorium, which form radon as a decay product. This means that the gas is likely to be emitted into the air close to the surface, so you can say any kind of building can be affected by an increased exposure.
Due to the fact that soil is permeable to gas, radon can be released into the atmosphere and the diffusion into the atmosphere is even easier if the ground is loose or cracked. Even if the earth's surface is sealed off by buildings, there is still a risk that it could enter the interior of houses through leaking foundations, pipes, joins, stairwells or cable shafts. Older houses and existing properties are, in fact, more affected by this than new constructions.
Pressure differences within a building even accelerate radon gas infiltration, which can lead to a suction effect. This means that radon is sucked out of the ground and into the interior of buildings. Here, a key factor is the height of a building: the higher the building, the stronger the negative pressure on the lower floors. Fireplaces, stoves and boilers additionally increase this effect.

Furthermore, there are usage-related differences. Usually, the room air is warmer than the outside air, which can lead to a negative pressure on the lower floors. In this case, the difference in pressure depends on the residents' ventilation behaviour. With a building height of five metres and a temperature difference of 20 °C between inside and outside, a negative pressure can be created on the ground floor. This means that through one-metre-long and one-millimetre-wide crack, several m³ of possibly radon-polluted air could be sucked inside per hour. Even with a slightly negative pressure in the ground-level rooms, radon is sucked from a radius of 10 to 20 m.

Another important aspect concerns both the weather conditions and daily and seasonal fluctuations. When there is rain or frost, less radon can be emitted because the radon-containing air is trapped in the ground. Nevertheless, in winter there is usually a greater radon exposure than in summer, as the ventilation cycles change according to the use of the building.
Room ventilation is an essential circumstance influencing the radon concentration. Once radon has entered the interior of a house, its composition makes it possible both to accumulate and spread throughout the entire building. Generally you can say: The farther a room is from the earth's surface, the less radon can usually get there. For this reason, ground-level rooms such as cellars or the basements are exposed to a much higher concentration than upper rooms. However, cable ducts and staircases facilitate the ascend of the gas, so that it can occasionally reach upper rooms as well.

Construction materials such as cement, gypsum and natural stone can also cause an increased radon concentration. They can emit radon because they consist of rock, which, in turn, contain thorium or uranium. Since these materials ar permeable to gas, radon can enter houses though their envelopes. But also water and gas supply as well as mineral collections can make the radon content rise.

A brief summary: Why can radon accumulate indoors?

Due to the great number of factors, the measuring values can vary considerably, even within a single house. Poorly ventilated rooms facilitate the accumulation of the gas, what, in turn, leads to an increased radon level within a house.

How is radon measured?

It is generally recommended to measure the radon concentration individually over a longer period of time (up to a year). The reason for this is that no conclusion about the exposure inside houses can be drawn from the survey of the BfS (German Federal Office for Radiation Protection). This is why an individual long-term measurement in different rooms of a building should be carried out in advance, in order to determine the exposure exactly. This radon measurement is carried out with a radon sensor or detector, which is placed in the presumably contaminated parts of the house, cellar or basement.

What can you do if radon accumulates in your cellar or basement?
If an increased radon exposure is detected during a long-term measurement, there are several possibilities to solve the problem. For example, you could renovate the respective rooms, seal the building envelope or apply a protective layer onto the surrounding walls in order to avoid radon infiltration. However, these methods are expensive and time-consuming.
Studies have shown that the radon concentration decreases significantly if the rooms affected are ventilated as regularly as possible, which is why even the World Health Organization (WHO) recommends this. So the key factor of minimising the radon gas exposure lies in automatic, efficient and needs-based ventilation of the rooms concerned.
This kind of ventilation is a comparatively cheap alternative and the installation of such an automatic ventilation control system, based on the measured radon concentration, only takes a few hours. It can be installed in both existing properties and new constructions. The decentralised system consists of a compact control unit with remote sensors. Thus, the room air can be monitored permanently with regard to radon, humidity, temperature, building fabric and actuators for supply and exhaust air appropriate to the room volume.

In the third part, we will have a closer look at the topic of radon ventilation.

More in this category: « Radon: Health risks and limit values The influence of CO2 on the air quality and our daily lives »
back to top