You are here:Blog»The influence of CO2 on the air quality and our daily lives 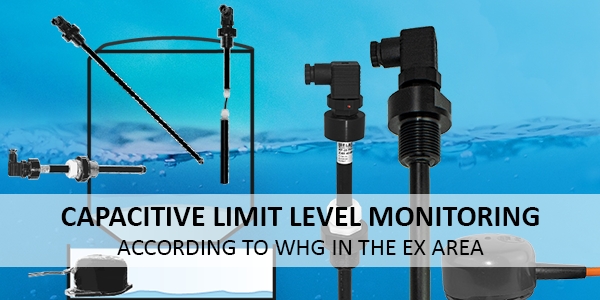 Our products of the new KF-/KL-25 series are applicable as overfill protections or leakage probes according to the German Federal Water Act (WHG) for water-endangering fluids. They can also be used in Ex area Zone 1.

Capacitive sensors provide for a cheap level detection of all fluids, especially non-conductive and viscous media, by changing the capacity of a condenser (change of an electric field).

Our sensors with their capacitive measuring principle have several advantages when it comes to level monitoring: Due to the integrated electronics inside the probe, their shape is very compact. That is why they are also suitable for confined installation conditions or very small tank openings. Another advantage of the capacitive sensors is that they can be installed variably.

The capacitive sensors of the KF/KL series offer a high chemical resistance and can be operated nearly maintenance-free. The switch point and sensitivity are variably adjustable, depending on the specific application.

Models of the overfill protections and leakage probes:

In order to comply with the special safety demands of monitoring systems, our capacitive probes can be combined with our optical-acoustic alarm indicators (OAA). The OAAs record the limit level messages of the connected level sensors or leakage probes and trigger either an acoustic, acknowledgeable signal or an optical, non-acknowledgeable signal. Additionally, the signal lines are being monitored for line break and line shortcut circuit.

Fields of application and use

Biogas plants convert a mixture of organic waste and renewable raw materials through fermentation into energy. In this process, levels in viscous, adherent fermentation media must be monitored under Ex-zone conditions. Therefore, in this context, capacitive sensors are very effective compared to other measuring methods, such as float and electrode measuring principles. The high flexibility in the fitting position and the low sensitivity with regard to sticking to the medium, are certainly some of the greatest advantages of capacitive measurement technology. Thus, our sensors can be passed through even the smallest tank openings.

Construction materials such as concrete or mortar are mixed by blending basic materials such as cement, lime and other materials. Dust and other heavy particles may settle to a more solid mass so that encrustations can develop on the measuring probes. Capacitive sensors are very flexible to mount and can be adjusted to the existing material structure in terms of sensitivity and switching point. This ensures an optimum and safe operation.

For applications in hydraulic presses, the capacitive measuring method is preferable compared to conductive measurement or float switches, as the low conductivity and fluctuating viscosity could be a problem. Especially when monitoring leaks, the capacitive sensor with its adjustable sensitivity can reliably detect hydraulic oil leakages and distinguish them from other effects such as condensation.

More in this category: « Radon ventilation with our KST-20 Vento/RN aH-Controlled: Ventilation and dehumidification as key factors for sustainable building preservation and creating a feel-good climate »
back to top